Ostrich: This large flightless bird is native to Africa. The ostrich can reach a maximum speed of 97.5km/h. It lives in nomadic groups of 5-50 birds. When it feels threatened, it will either run away or lie flat on the ground. It can also attack by kicking with its powerful legs. The legs can, however, only kick forward. The ostrich mainly eats plant matter such as seeds, shrubs, grass, fruit and flowers. They sometimes also eat insects. The legs and neck are mostly responsible for the incredible height of 1.8-2.7m. The body weight of the ostrich is between 63-130kg. Feathers on an adult male are black, while females are grey-ish brown and white. The legs lack feathers and show bare skin. There are two toes on each foot. The beak is flat and broad. The wingspan is about 2m, and they are used in mating displays and to protect chicks from the sun. Males are sexually mature at 2-4 years of age, while females mature 6 months before the male. Mating season starts in March/April and ends just before September. The incubation period is 35-45 days. The females lay their eggs in a communal nest 30-60cm deep and 3m wide, which is made by the male. The female has the ability to locate her own eggs within the communal nest. In breeding season (and sometimes in very dry seasons), ostriches travel with other grazing animals such as zebras and antelopes.

Martial Eagle: This bird is mostly found in sub-Saharan Africa, but greater populations can be seen in South Africa. The Martial Eagle prefers semi-desert and open savannah spaces. Its’ prey can consist of birds as large as the stork; but it is mostly guinea fowls, baboons and impalas. The eagle hunts in flight. The nests are built in trees, and on electric-power pylons. They are used year after year and measure 2m in diameter and 0.9m in depth. Generally, only one egg is laid per year. The Martial Eagle has a conservation status of Near Threatened, due to hunters.

African Finfoot: The habitat of the African Finfoot is in Western, Central and Southern Africa. It can be found in wooded savannahs, mangrove swamps and forests. The bird is an underwater expert with a long neck, sharp beak and red feet. It feeds on underwater invertebrates such as mayflies, crustaceans, snails and fish. The Finfoot is almost always seen alone or in pairs. It is, however, a very secretive bird. Therefore, even extremely experienced ornithologists see them very rarely. The breeding coincides with the rainy season. Nests are messily built out of twigs and reeds, on a tree above the water. Two eggs are laid per year, and chicks leave the nest only a few days after birth. The conservation status is unknown, due to the bird’s elusive nature. It may become threatened though, due to wetlands being polluted. No Finfoots can be found in captivity. 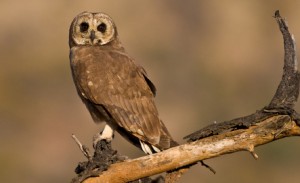 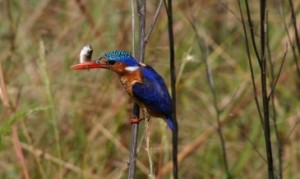 Purple Roller: This bird is found from sub-Saharan Africa to Southern Africa. It has rather dull colours, and a harsh voice. The habitat is mostly dry thornveld, where they sit upon thorn trees or poles. They feed on insects, spiders, scorpions and small lizards. The purple roller is an opportunist breeder, as the breeding seasons are linked to rain seasons. Nests are found in natural hollows in trees, or in old woodpecker holes. 3 white eggs are laid annually, and the chicks are fed by both parents.

Greater Honeyguide: These birds guide people to bee colonies, hence their English and scientific names. Its habitat is found in dry, open woodland. The greater honeyguide is 20cm long, and weighs 50g. The male has bold, white patches on the tail, a black throat, pink bill and whitish wings. The female has a duller coat, lacks the black throat, and has a blackish bill. The bird feeds on content from bee colonies (bee eggs, larvae, waxworms and beeswax). The greater honeyguide is one of very few bird species that can digest wax. Eggs are laid 10 to 20 times per year, with 3 to 7 white eggs at a time. Each of the eggs is placed in a different nest of a bird of another species.

Pied Babbler: This bird can be found in Botswana, Namibia, South Africa and Zimbabwe. Each pied babbler weighs between 75-95g. Groups consist of 2-16 adults, and it is impossible to distinguish the males from the females using physical attributes. Each group has a dominant breeding pair, and together they produce between 2-5 chicks. New clutches of eggs are produced three times a year. Breeding season is from late September to early April, but it depends on the rain. The incubation period is 14 days. A specific purr is used to inform the chicks that food is ready. Parents use this call to teach the babies how to fly. This is done by purring a distance away from the nest, so that the babies would have to fly a certain length to the parents. 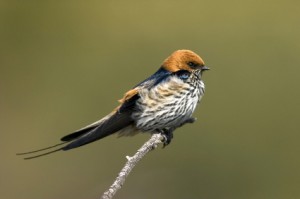 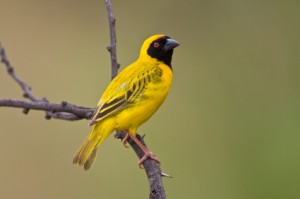